The Benfer Wiki
Register
Don't have an account?
Sign In
Advertisement
in: Characters, Male Characters, Deceased Characters,
and 4 more

Daniel is a Klayman. When his friend, Henry, found a loaded shotgun walked in on Daniels conversation. He watched as Henry shot of one of his friends legs off. He and another klayman thought it would be fun to shoot an apple off of Daniels head. Daniel put the apple on his head and said "Shoot the apple off my head Henry. You can do it I know you can." Henry then shot off a chunk of Daniels body ending his short lived life in the 2003 of Henry's Shotgun he is called Rick. 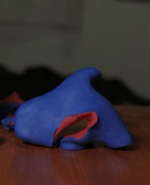