All Gone is the final episode of Klay World, released 10 years after the first Klay World episodes. It was released on September 2, 2013.

The finale begins with a lone klayman standing in the middle of Klay World. He sees a large pile of clay. In the present day, Chip and Rick The Prick arrive at the fabled Klay World party they heard about. After a brief conversation with Chester (A.K.A. Long Arms) and Marv, Chip runs into Dr. Bob, who insists that Chip just call him Bob after he retired. Bob explains that he put the party together and that it was a goodbye party, for he was going to leave to go outside.

Bob reveals that he was the first klayman and explains that a long time ago, he woke up in the middle of a table. After a long while of doing nothing completely alone, he finds a large pile of clay, and decided to create Klay World. Bob explains that he had set up all the horrible situations that the klaymen have been through over the years, and whenever a klayman died, he would rebuild them. Bob then explains that he is bored of Klay World, and that he is going to leave.  Bob then reveals that he hid weapons in the food that Chester supplied for the party, and that it was only a matter of time for total chaos to erupt, and that this time, if a klayman died, he would not rebuild him.

Almost immediately afterwards, a klayman finds a gun hidden in the hot dogs, and accidentally kills Chester. Chaos erupts and many klaymen are killed. Chip, Rick, and Pick decide to leave the table. Sometime later, Henry finds a minigun and kills many klaymen, including Handyman and his friend who accidentally shot him. Bob realizes his mistake in giving Henry a minigun, and reveals a rocket launcher he taped under the table for protection.

Off the table, Chip, Rick, Pick, and Marv arrives in the old room and find New Klay World, which was crudely after Bob moved the table to the new room. When he sees it, Chip starts to realize Klay World may have a potential without Bob. After a short conversation, a delirious Vince arrives and reveals that he has been living in the truck from Klay World: Off the Table. Marv kills Vince after a brief conversation. He explains that he wants to be the last klayman alive, and tries to kill Chip. Pick punches Marv into one of New Klay World's sharp points, killing him. Chip decides to return to Klay World to try to talk reason with the remaining klaymen and Bob.

Back on the table, Bob launches a rocket at Henry and blows him off the table. After the klaymen on the table are attacked by the Giant Klayman, Chip, Rick, and Pick mangage to get back on the table by driving the old truck, inadvertently knocking the Giant Klayman off the table to his demise. Chip gives a speech on how Bob manipulated everyone for his own pleasure and that whenever someone dies, he rebuilds them. Some klaymen attack Bob, one of them stabbing him in the shoulder with a knife. Chip tries to talk the klaymen out of killing Bob, but is interrupted by klaymen who attempted to build their own klaymen. The deformed creatures kill their creators and attack Chip, but Chip kills them with Marv's shotgun.

After the deformed klaymen are dealt with, Bob tries to talk Pick into helping him, and after he refuses, he kills Pick. Chip and Bob have a short standoff, but the standoff ends when Henry, on the floor of the room, shoots a rocket at the table, flipping it on its side. Chip and Bob survive by grabbing on to the the far end of the table. Henry sees this, and tries to shoot a rocket at them, but Rick arrives and sticks his hand into the barrel of the rocket launcher, killing them both.

Back on the ledge of the table, Bob attacks Chip with the knife he was stabbed with, and both are knocked down. Chip finds a sword in the rubble of klaymen bodies and fights Bob with it. Bob gets the upper hand and slices off Chip's right arm.  Bob is about to kill Chip, when he suddenly puts his stump onto the bodies of the klaymen and takes control of it. He raises a huge pillar of clay and grabs the end of the table, flipping if upside down. He and Bob jump out of the way, but Bob gets his legs caught under the table, while Chip escapes unscathed. Bob tries to get out, ripping himself in two in the process. Chip tells Bob that the only reason that Klay World had such stupid inhabitants is because Bob made them that way, and that Chip was going to rebuild everyone. Chip explains that everything will be safer, and that Klay World will have a new name: Clay World, spelled with a "C". Bob realizes his mistakes and dies peacefully, the final shot of the series being from Bob's perspective, of him seeing the carnage he caused. 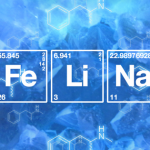 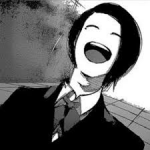 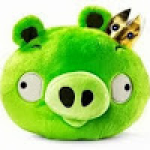 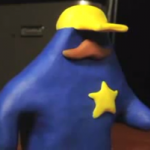 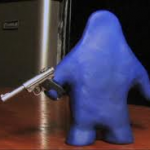